Okay, yes, I had to translate that. My French language skills are nowhere near primed enough to string even the most basic of sentences together. Wish I could, mind, French is the most recommended language for native English speakers to learn. While it might not be the most widely spoken first language it is extensively spoken as a second language in countries here there and everywhere. It’s certainly taken prominence in the last two trips @tigziefc and I have taken. Why am I babbling on about French? Well, we just got back from Paris:

Check out the blue sky in this picture! It didn’t hang around for too much longer, and was gone after the first day. We decided to go to Paris a few months back, why? Well, I’ve never really properly been; I say that because school trips don’t count, I can barely even remember it. That coupled with the fact there is lots to do see (Also, Disneyland!).

Being a bit of closet train nerd I was secretly looking forward to getting the Eurostar to Gare du Nord, I’ve not ever seen the ‘other end’, other than in pictures. Needless to say, our end is better -  admittedly newer, but still definitely better. That’s not just because there are fewer French people, but it just seems cleaner and much more British, certainly consistent with obsession to over engineer things.

For the first time ever I managed to use Google Latitude outside the UK, check out our path: 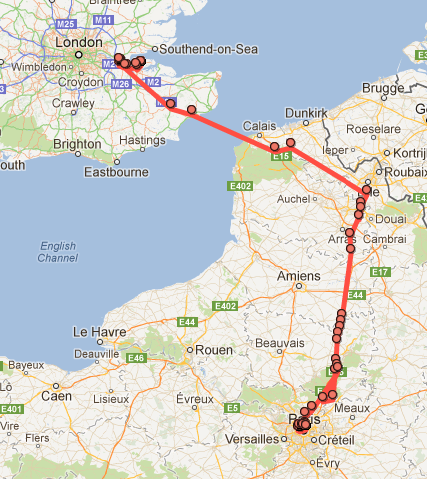 Geekiness aside we managed to get a lot done in the four days we were in Paris. We visited the Eiffel Tower, Arc du Triumph, Champs Elysée and even the Paris Hard Rock Café (Which is a sad obsession of whenever visiting a major city). 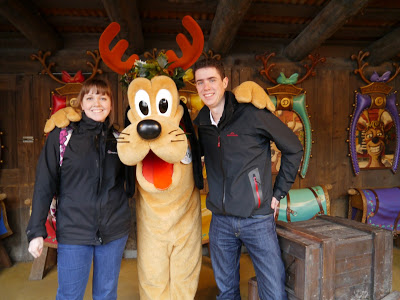 Of course we also had to visit Disney and lucked out quite a bit because it was so cold there weren’t many people around! This meant we walked on to practically every ride. This was great, apart from that too many rides too fast resulted in chunks nearly being blown. Here is a picture of me Victoria and Pluto (who is for some unknown reason dressed up as a reindeer).