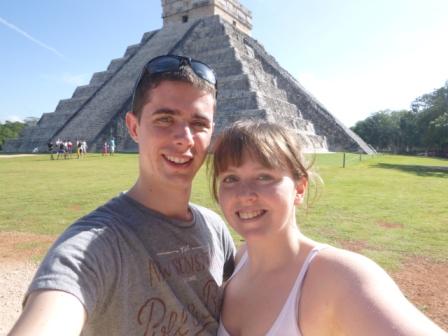 Went to visit one of the wonders of the modern world today. Been looking forward to this for a while, and it was basically one of the selling points of this holiday, since I can only sit in the sun for so long. The trip to Chichen Itza involved a 3 hour long coach drive, it probably would have only taken one hour is we hadn’t stopped so many times along the way… Grumble as I may it was also the best coach journey I’ve ever been on since there was a guy serving free beer.

The wonder was pretty good, once we got past wave after wave of people trying to sell us their crap - even the tour guide was trying to flog us ‘maya’ gold. It was actually fairly large, despite my rather loud announcement to the group that I expected it to be bigger. Disappointingly you’re not allowed to climb up it any more which was the first thing I wanted to do. There were no security people that could have hindered a sneaky climb but since everyone in Meixco has guns I decided against it. Despite the very real possibility of death I did manage to surmount the security rope for some other piece of ruin while Victoria took a picture. On our later perusal of the pictures we agreed that it is definitely an ancient loo - very exciting! 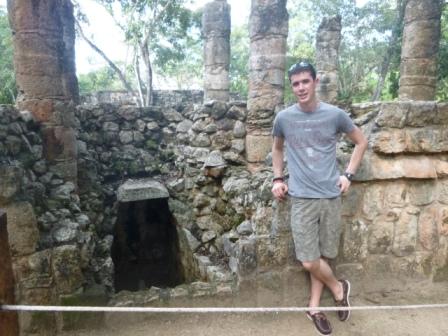 After the wonder we went to a sink-hole for some swimming which was amazingly cool. The sink-hole was in the middle of the jungle, luckily somebody had built a road to it and a platform on which we could swim from. The sink hole was apparently part of an underground river, all I know is that it was the deepest thing I’ve ever swum in. I later reflected that swimming in what is essentially a large puddle with no filtration system may mean that I now have some kind of a disease. If I didn’t get a disease from the swimming I most certainly did from the dodgy-as buffet. “All you can eat” read: “All you dare to eat” “TIPS! Please senor, tips, tips”. 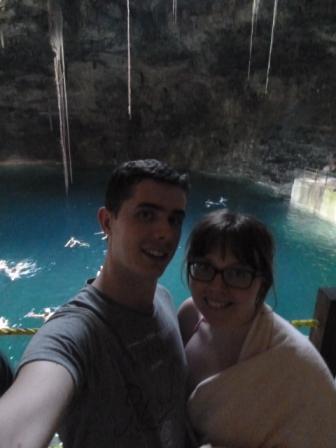 Following the swimming we went to a town with an old church and conveniently parked right outside a shop. I bought some tequila that has a worm inside - I don’t intend to drink it.