The Maldives were lovely, but there were no wrecks. It was time to do some real diving… The M2 is WW2 submarine with the unique feature of a hangar and her own sea plane, a kind of submersible aircraft carrier. She was one of three M-class submarines built for the Royal Navy and after the accidental sinking of her sister, the M1 she was pulled from service and retrofitted with the hangar. Sadly the M2 also sunk shortly after in 1932 after what is believed to have been a failed launch exercise off Chesil beach in Dorset. The wreck lies in around 32 meters of water and sits perfectly upright making it very easy to make out key components of the boat.

We launched around 9am on Saturday morning in pouring rain, of the many dive boats in Portland Harbour we were the only dive boat going out - which was a little alarming. The journey out wasn’t too bad, there was some swell as we travelled down the eastern part of Portland Bill. The sea picked up considerably once we were unprotected from the south-westerly winds and everyone including me got a little bit sick! 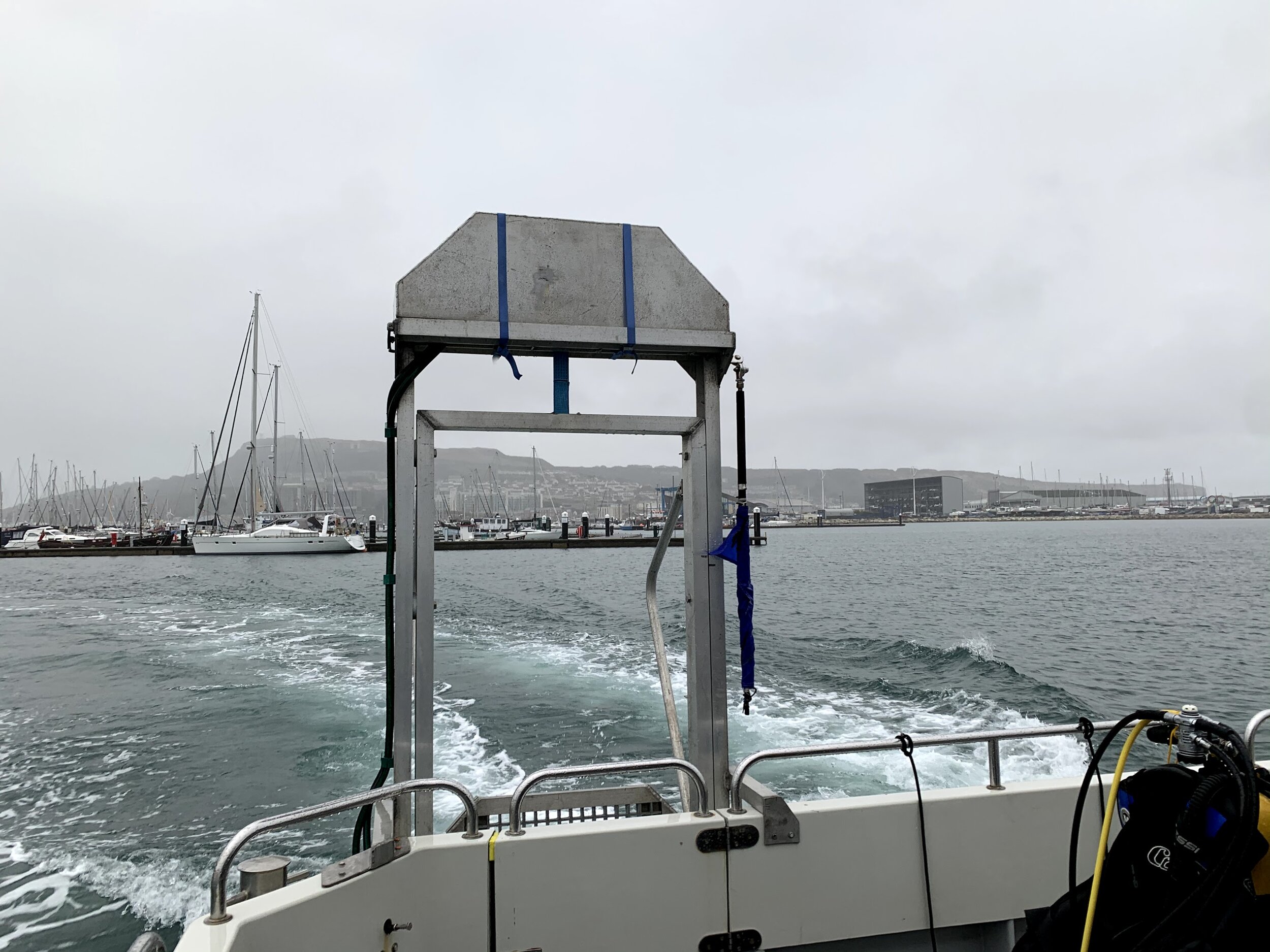 This was a big dive for me, since passing my PADI Tec45 I have bought my own twinset, regulators and wing, a significant equipment investment. It had taken quite a lot of logistics to make sure that I had everything for this particular dive, but thankfully everything arrived in time. I was a little apprehensive since I had not dived this particular rig before, but confident that everything was working as it should. 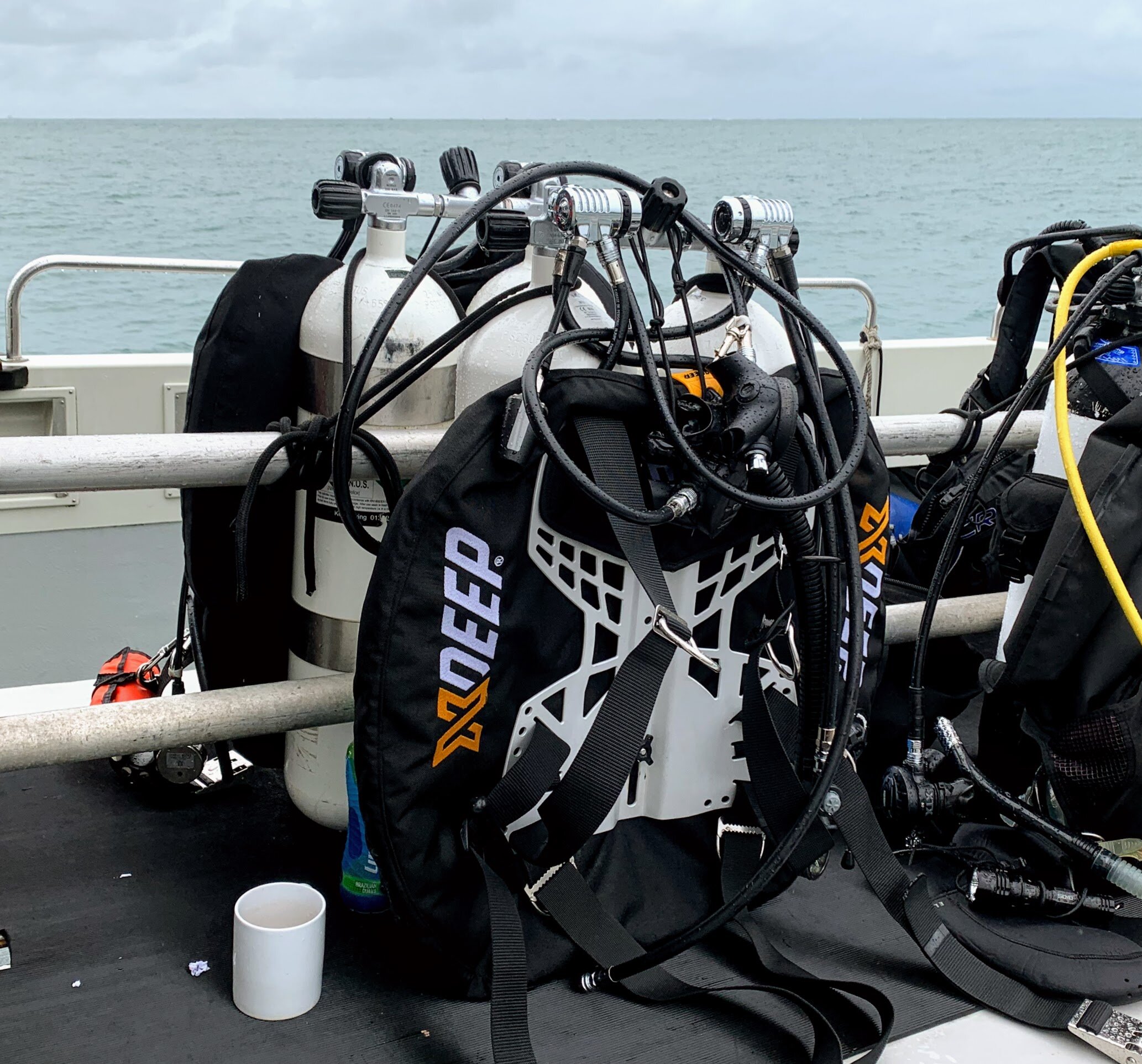 Once we were above the wreck the skipper threw the shot and a short while later we were getting kitted up. I buddied with Art, a technical trained diver who I had dived with before at Vobster Quay in the UK. We were planning for a 30 minute bottom time before heading back up the shot which should take around 20 minutes, giving us a planned 45/50minute run time. Art was to run against his deco plan I was to copy, relying on my computers for if I were to lose Art. Art was running 21% back gas plus a 50% deco mix and I was on 21% back gas for the entire dive.

We dropped down to about 5 meters where I checked my equipment was all in order, Art hung slightly above to confirm. We reached the wreck in just a few minutes after a steady decent, the visibility at the bottom was good, at least 5 meters, which given the weather was surprising. There was some current but this dropped away once we reached the bottom. 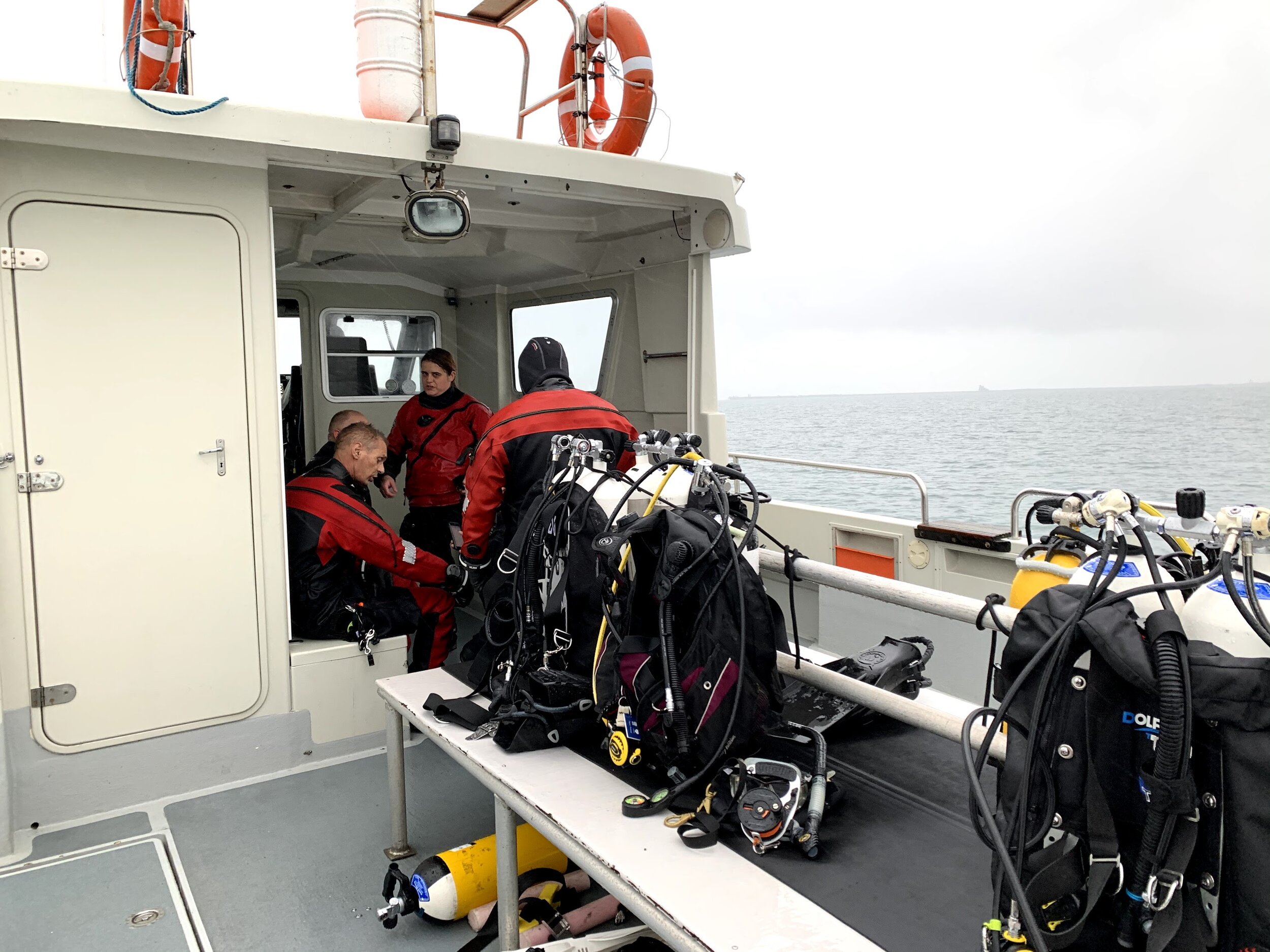 At the bottom of the shot the submarine emerged, the hangar was right on the line. I adjusted my equipment and buoyancy and checked my backup regulator was still working correctly. We headed off towards the bow on the starboard side, the wreck has deteriorated after all these years and there were a number of holes on the side of the hull. On the top of the boat there were the visible catapult tracks for the aircraft, leading out of the hangar and steel chains could be seen through the tracks. At the bow there was a lot of sea life, all cosied inside the wreck, protected from the elements.

We headed round to the port side and swam back towards the stern. A number of crabs were crawling on the side covered in barnacles, experienced in evading fishermen! We reached the hangar and swam around the conning tower. This was my favourite part, the ridges on the circular tower just above the hangar can be made out in the picture, looked identical underwater. The tower still had many of the antenna and steel masts, many of these had remnants of lines tied on by boats or other divers. Rounding the tower we descended slightly again and went inside the hangar, we penetrated maybe 3 or 4 meters before being faced with a huge bank of silt which I didn’t want to go near(!).

Backing out of the hangar we called the dive and agreed to head back up the line. We followed Art’s deco plan well and at 20 meters he switched to his 50% mix. Ascending slowly we worked our way up and at 6 meters Art threw up an SMB. We both continued up and after a slow ascent I was left with only a few minutes at 3 meters. We surfaced just off the shot line to a choppy sea and all other divers on the boat. I had about 108 bar left in my twins with a consumption of 17.3l/min so probably could have extended the dive but was happy to keep it short and safe.

Back on board we all spent the next half hour talking about the dive and what we saw. Brett and Jayne had followed around to the stern and were able to see the two horizontal stabilisers, which would have been an interesting sight - perhaps next time! We powered back to harbour and were relieved to reach calmer waters on the eastern side of the bill. A fantastic dive, my new equipment worked a treat and I don’t think I can recall a more comfortable dive. I was warm, had good natural trim, perfect buoyancy and had enough movement to reach valves and gauges. I was far, far more comfortable at 32 meters than I was sitting on the boat!