Day 3 was set to be a warm up for what was to come, long days spent on trains doing nothing but relaxing and looking out the window. We started the day getting up early and leaving the Ibis, it has served us well, but we couldn’t wait to leave. The walk to Messe/Deutz station was quiet, nobody was really awake, clearly everyone had a late night partying in the streets. We hoped to find some breakfast at the station and needed something for the trip ahead and were pleased to find a McDonalds, which I’m sure won’t be the first of the trip. A beef and egg McMuffin later we were refuelled and headed to the platform. 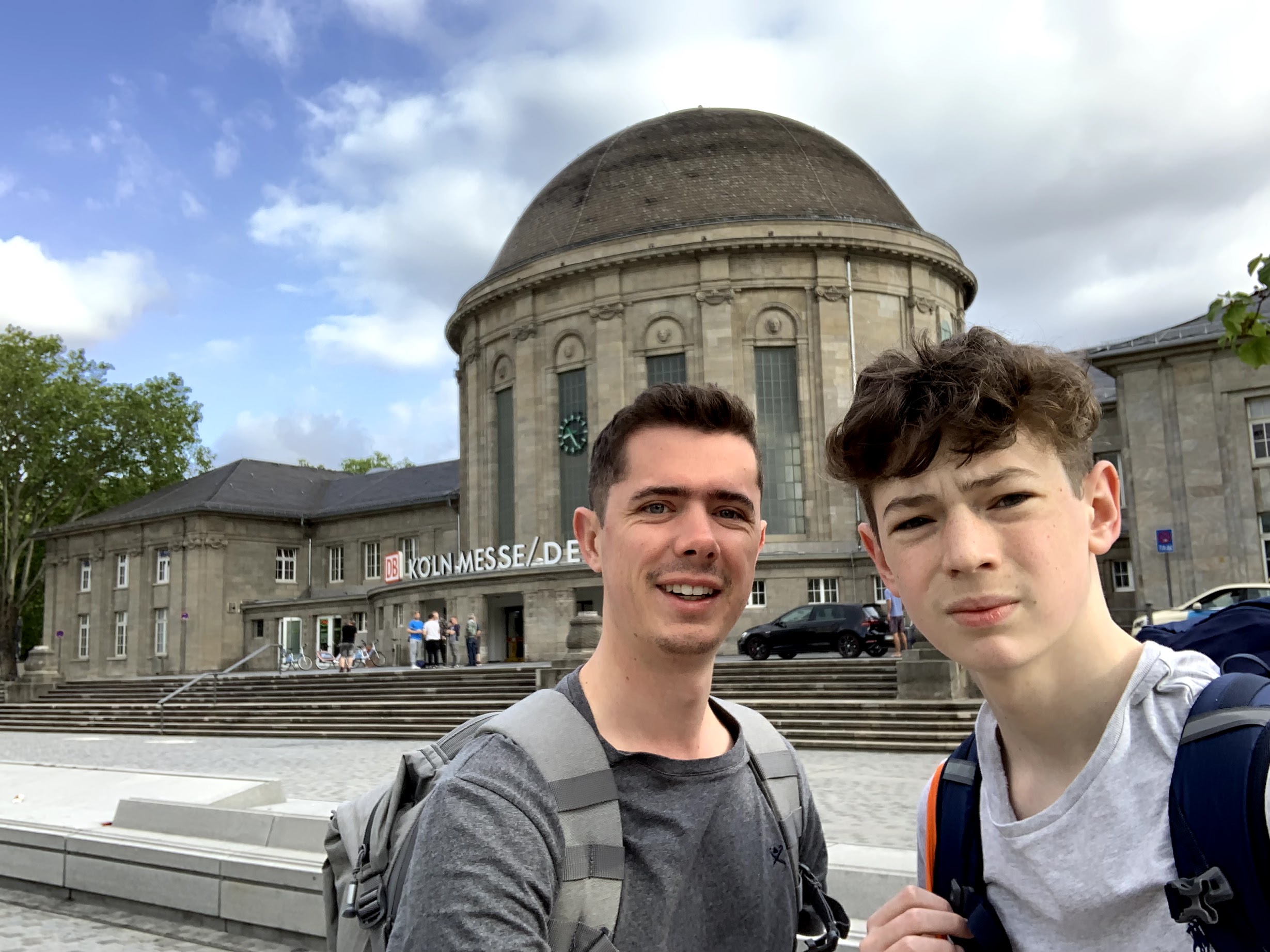 This is where things started to go pear-shaped. We discovered quite quickly that the train was delayed and then discovered that there was only half of the usual set of carriages, and the carriages missing were the ones where we had a seat reservation. Not good. We hung around on the platform for about 90 minutes hoping that all will be well, the increasing number of passengers congregating on the platform was also a worry. 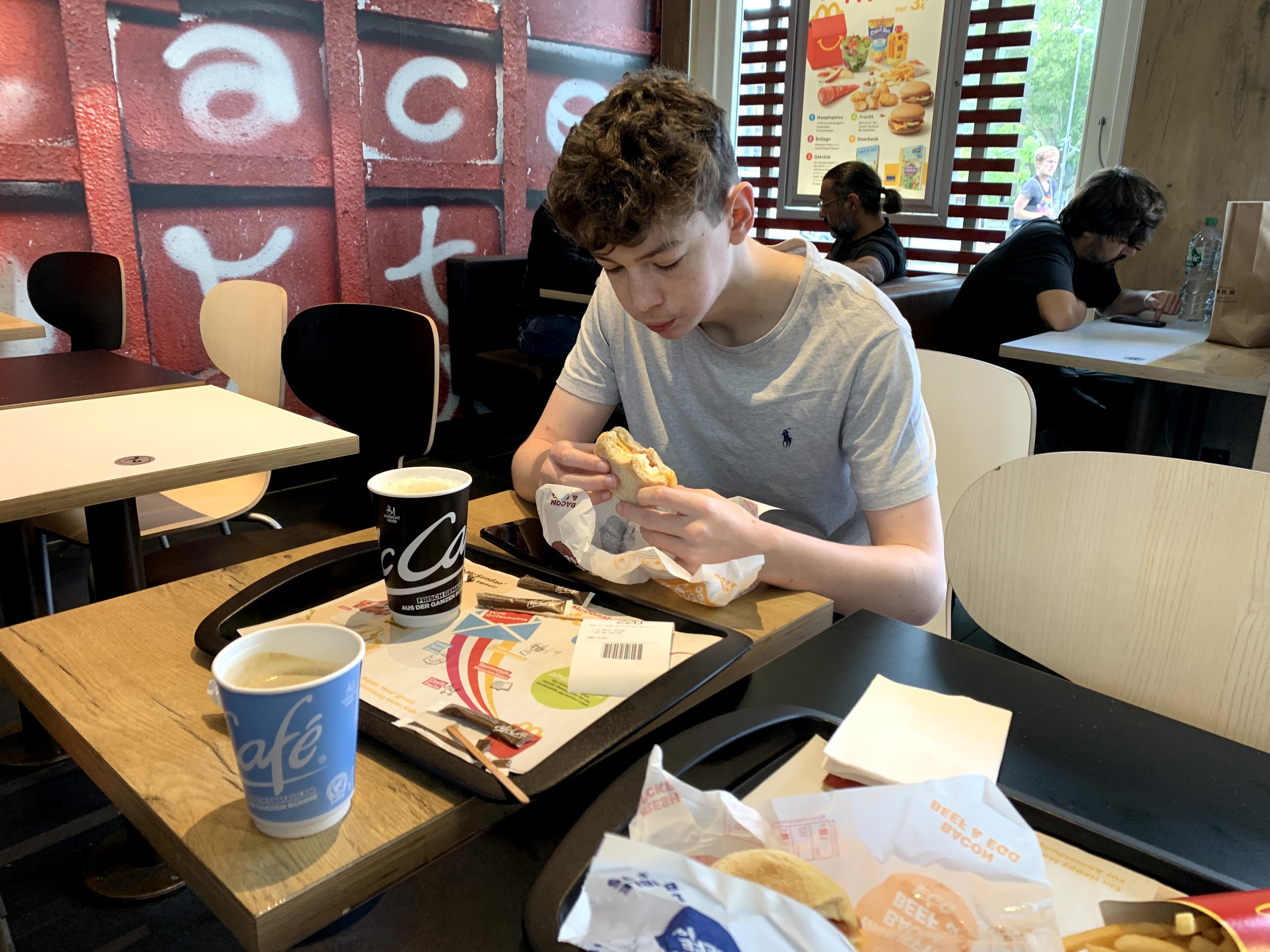 The 09:36 service to Munich eventually turned up and we jumped aboard and grabbed the first set of seats we came across. It seems that in Germany you can screw up half of the reservations and just pretend like nothing happened to that half, but the other half continue to remain valid. In the UK if there’s ever any kind of delay or technical screw up reservations are simply cancelled and it becomes a free for all. I think I prefer this system more, at least you know where you stand. We were safe in our seats for the time being and settled down and I pushed out the first of two blogs which I hoped to complete that day. 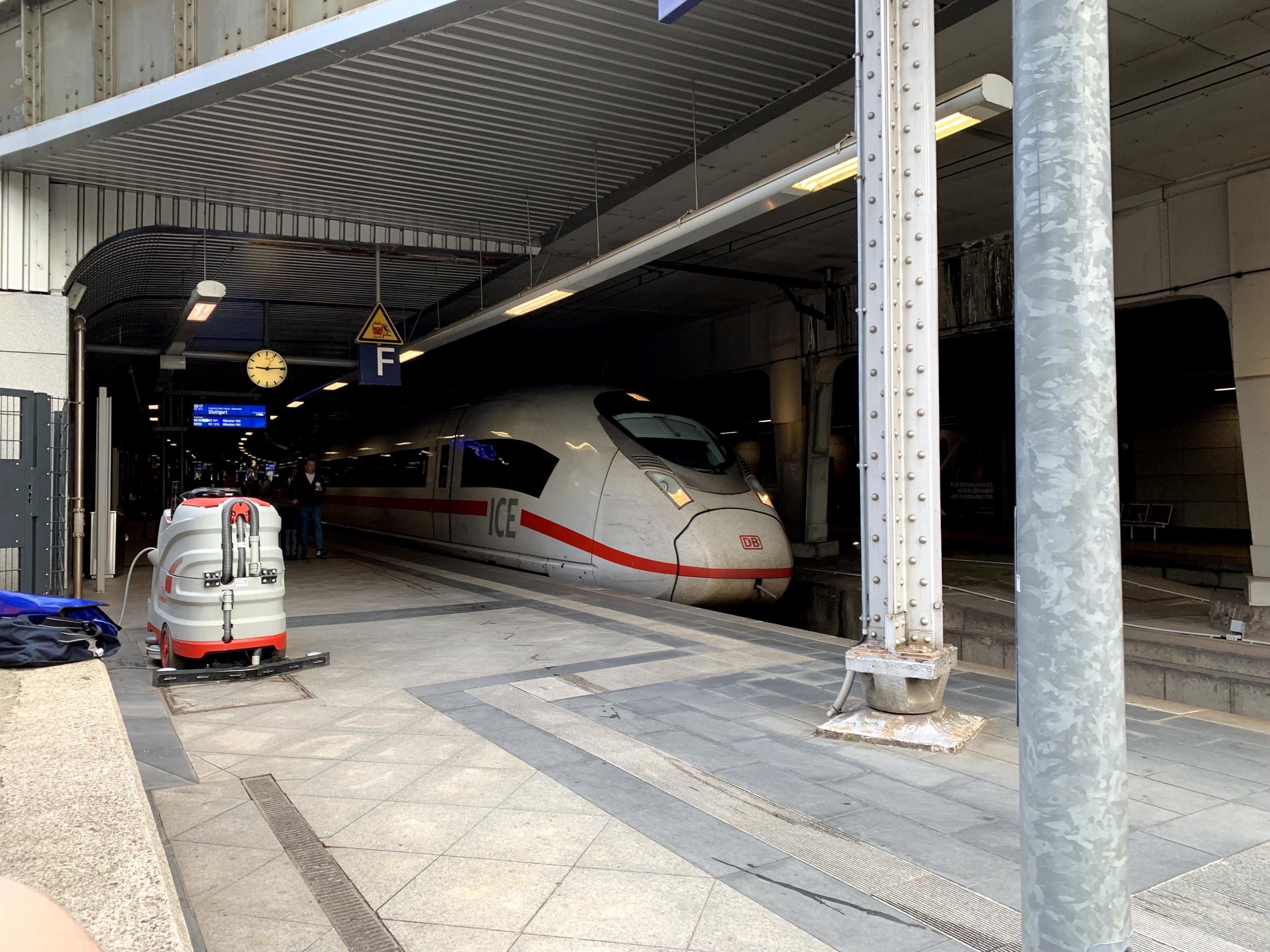 Aside from it having some parts missing the ICE train really was quite lovely, the seats were very comfortable and the recline was more than I’ve ever had on a train before. Toilets were clean, easy and available and best of all the carriage was very quiet, we pushed 300Km/h and I barely even knew it was fantastic. We began to catch up to the previous schedule and were soon at Frankfurt where our squatted seats were expected to soon have their owner arrive. After a small lecture from the conductor we decided to go in search of replacement seats, we failed. 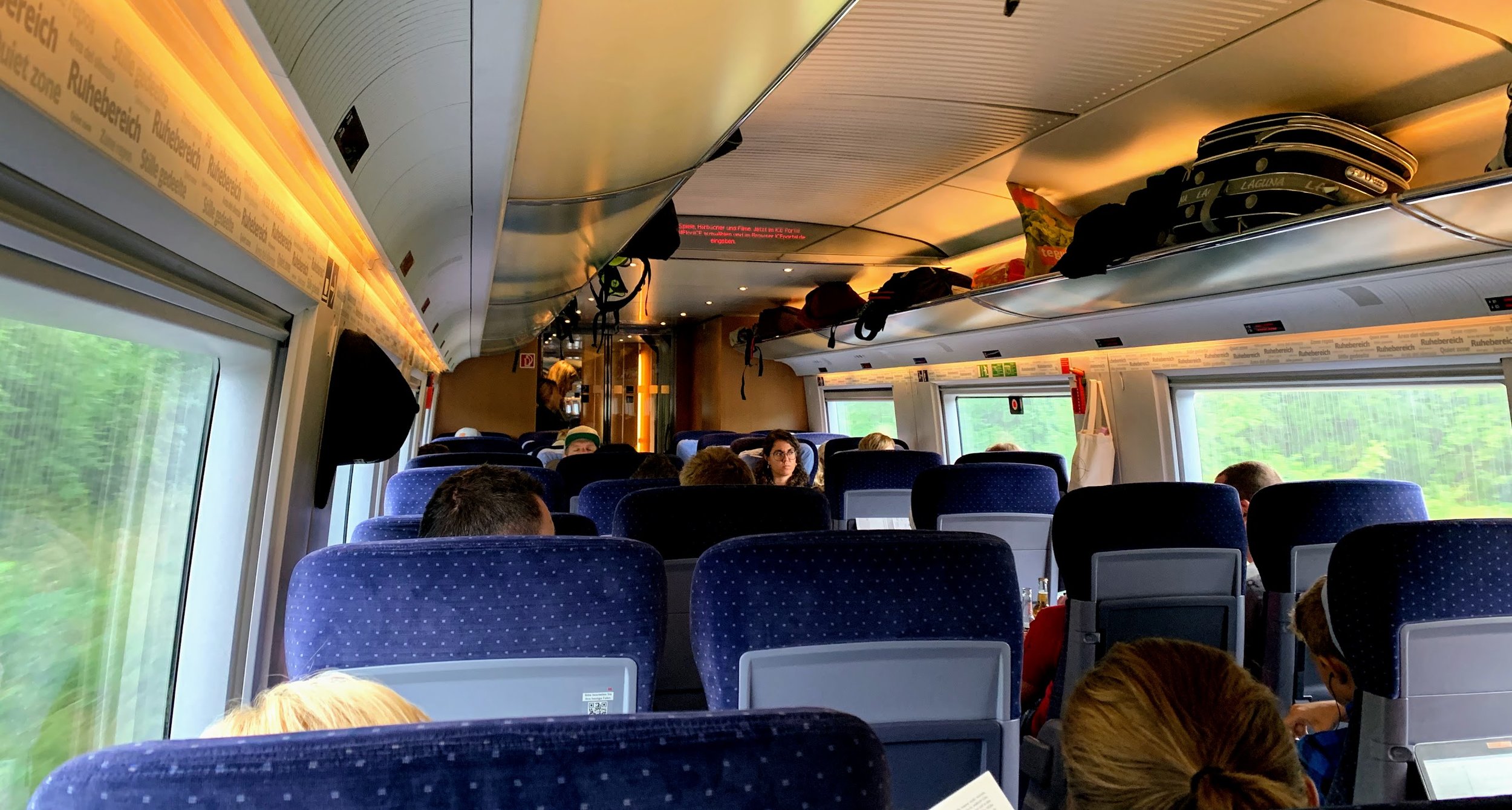 So we squatted again and looked busy, tired and grumpy. 10 minutes after leaving Frankfurt it seemed we made the right call as no seat owner had arrived. Phew! The rest of the journey was very relaxing we sat back, enjoyed the ride and got into the groove. Managed to upload the blogs with images which while on the train has been a bit of a problem. The cellular signal and free train WiFi just don’t cut the mustard, I will say that the ICE WiFi was the best of all though, much better than Thalys and Eurostar. 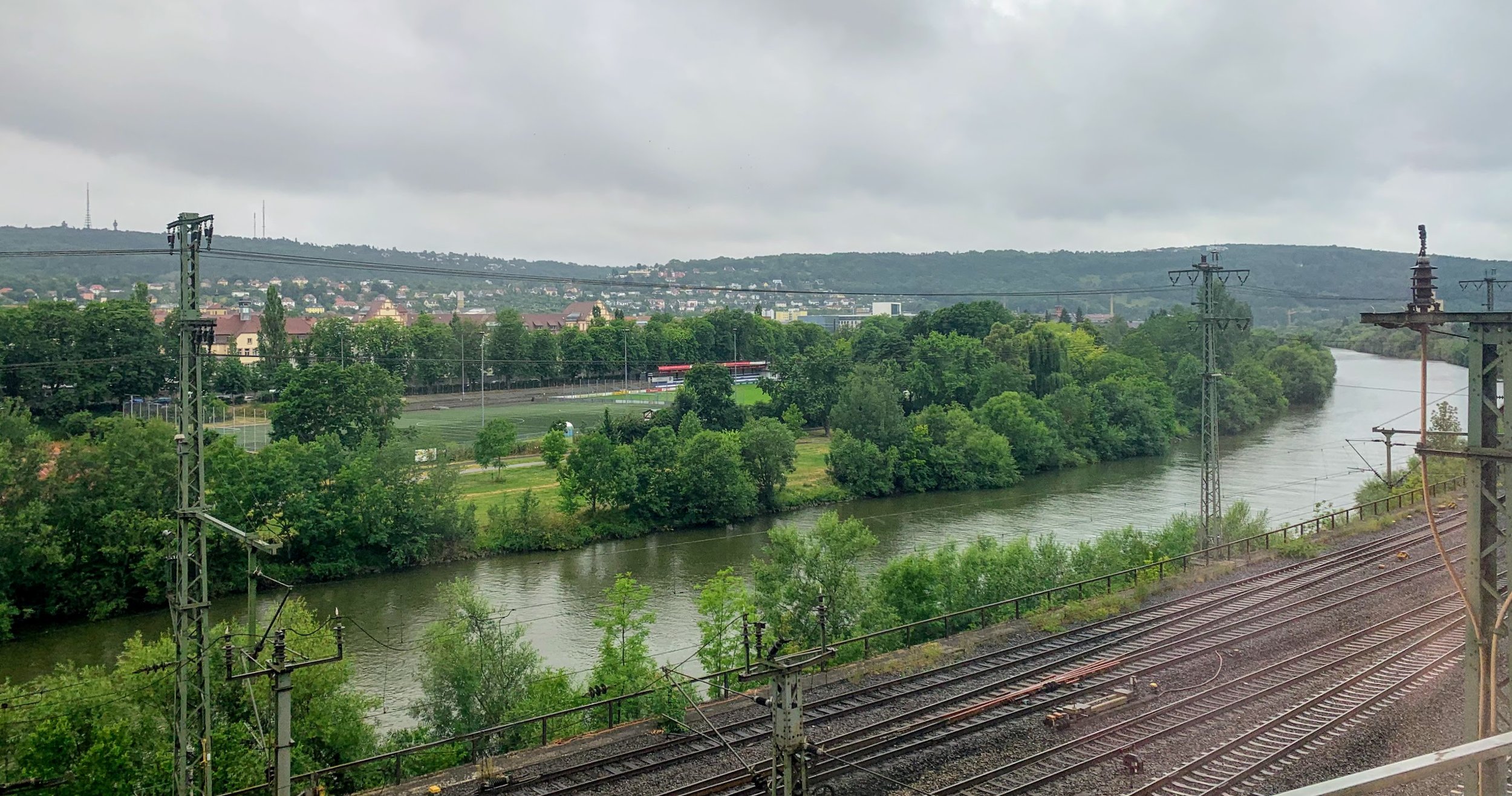 We arrived a little late into Munich but frankly it was nothing to write home about, in the end the journey was good. Munich station is HUGE we spent some time taking it all in, I have vague memories of that station from when we visited Oktoberfest in 2010 but there’s a lot of time between then and now so I had absolutely no idea where anything was. Outside it was torrential rain, which seemed to come out of nowhere because it was dry when we were on the train, we opted to hang around for a little while and threw Owen’s bag into bag locker to save carrying it around with us. 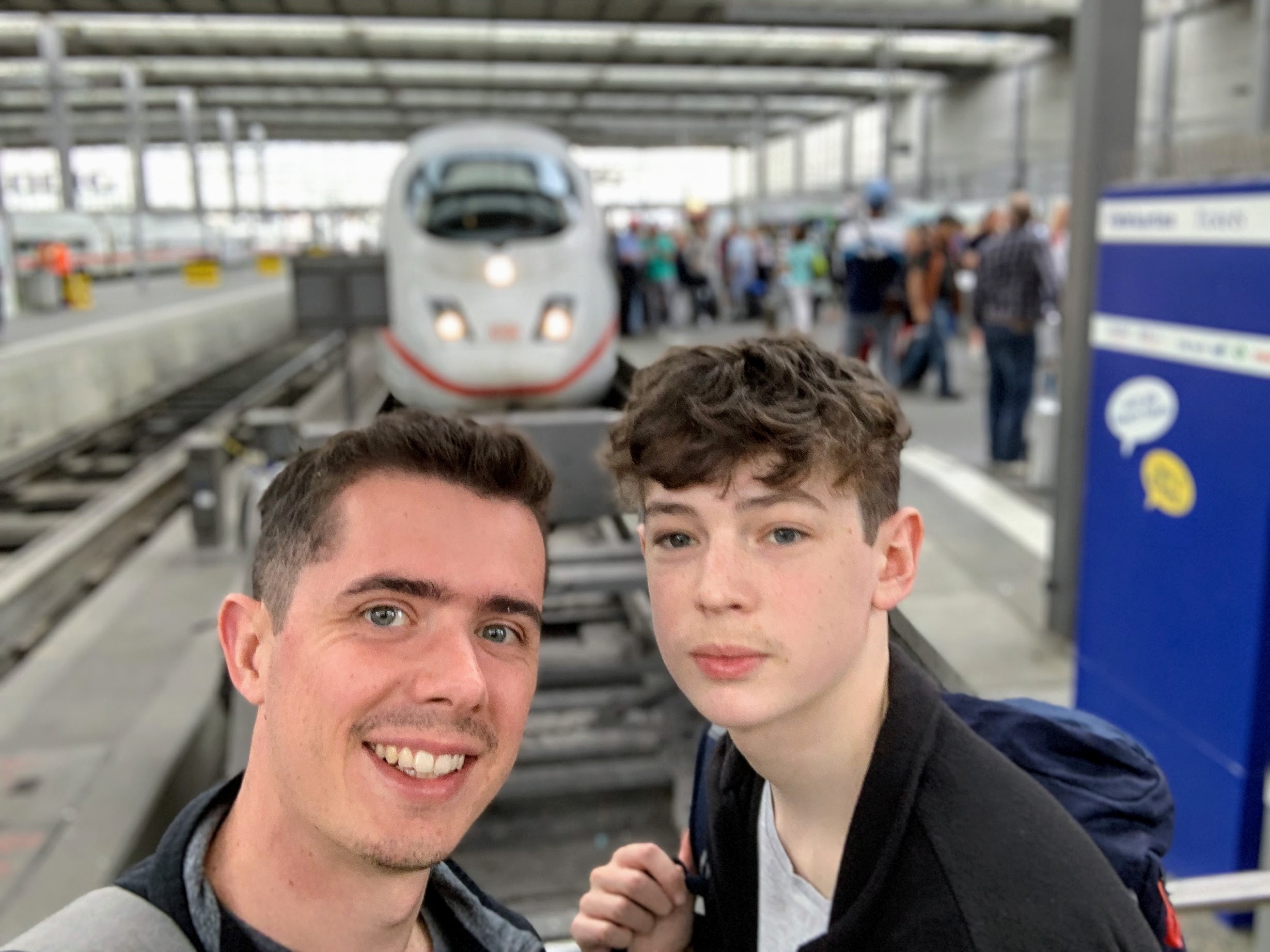 Five minutes later and the rain had stopped so we headed into town, we had no plan except to drink beer and see some old stuff. Munich centre is very easy to navigate and everything seems to revolve around the main street which at the end of which is the train station. We first headed for the Dom which was not as impressive as the “Big Black Church” this one instead had two big nobbly bits on top, inside it was pretty impressive huge too. 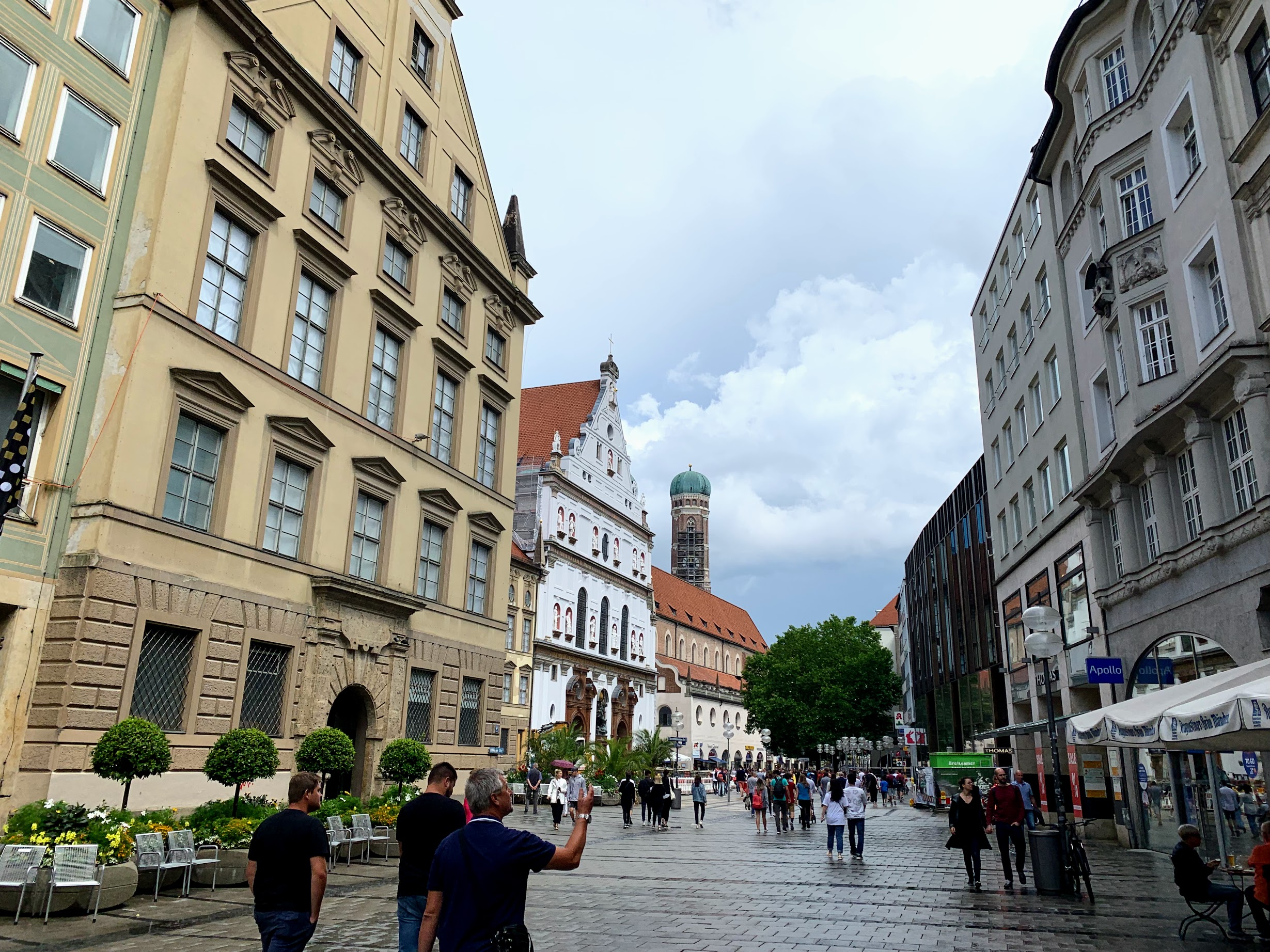 We then went in search of beer feeling like we have satisfied the historic culture requirement. The first stop was to try and find some Kellerbier and we succeeded at a small beer-restaurant where Owen had his ID checked (Ha!) . The beer was good, but wasn’t the best I’ve ever tasted so we quickly finished up and went in search of more. 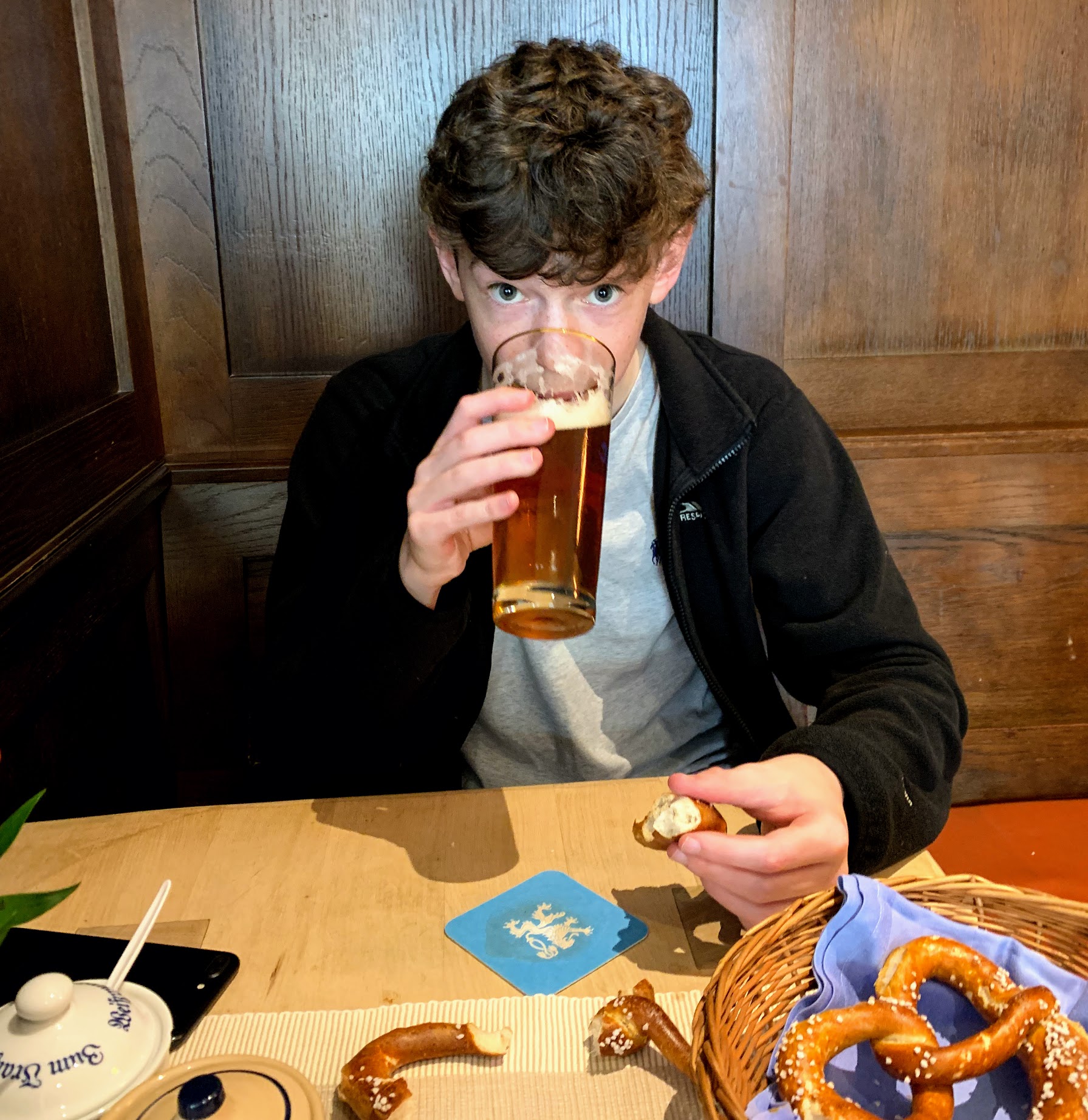 The best spot for beer in Munich it seems in the Hoffbrau House, an enormous beer hall in traditional Bavarian style with beer served properly in 1 litre steins. We sat ourselves down and strapped in for what would be a good three-hour session. My goodness - the beer here is heavenly. I love Kolsch but this is special, the atmosphere is missing in Cologne, here it is an absolute party. The first litre went down like it was nothing, crisp, cold, malty, perfect. We ordered a pretzel from the Pretzel-girl (6 Euros!) and dived into number two. 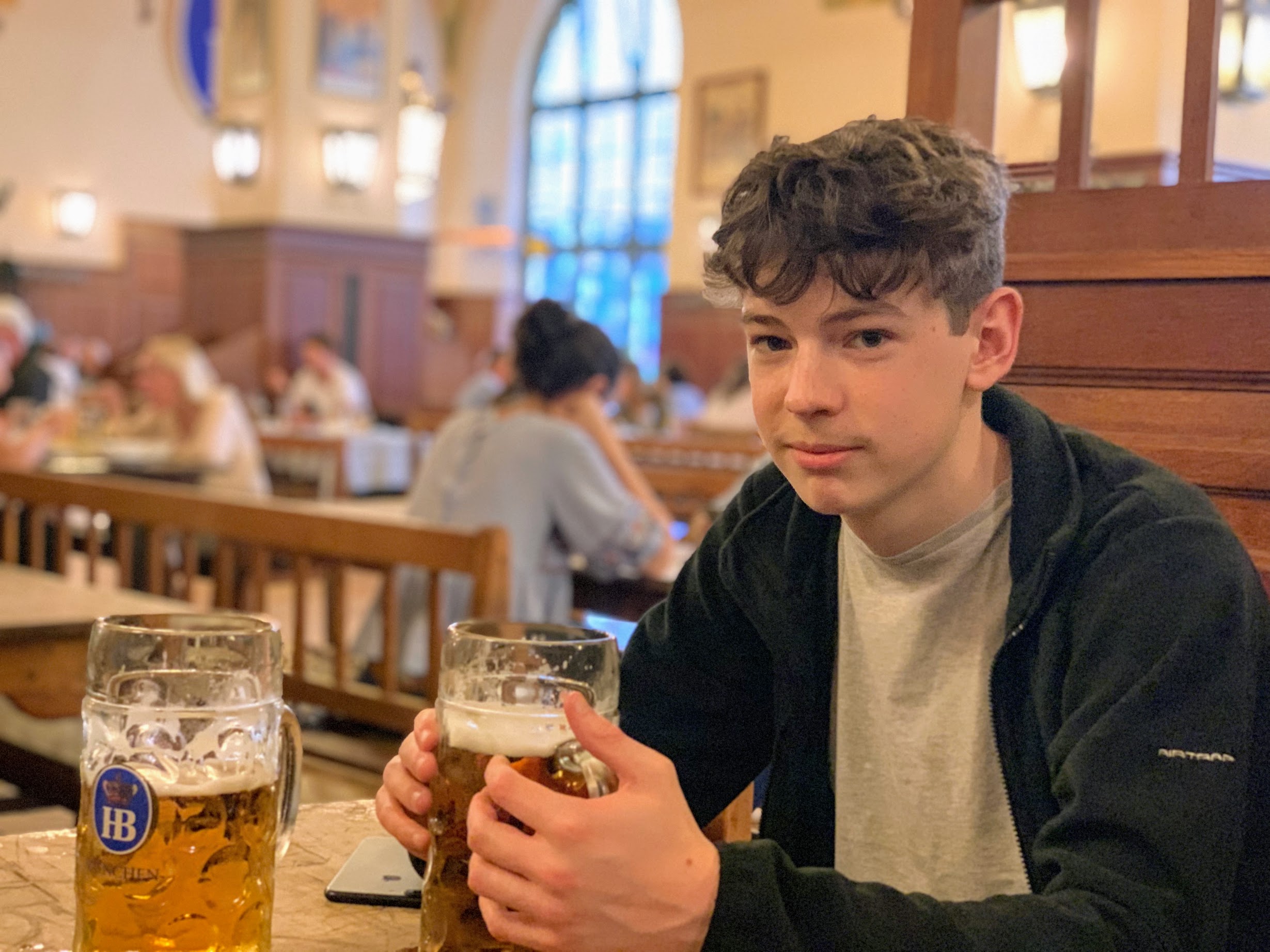 This is where we should have stopped. The second for me was just as good as before, it was getting a little louder and we put ourselves in the corner so that I could upload the second blog of the day, which doesn’t take long provided there is good signal. Owen continued to claim that he wasn’t hungry and despite my persistent nagging that he should eat he wasn’t interested. I ordered a wienerschnitzel and coming to the end of the second (and now in the groove) ordered us one last stein because I’m sensible and measured. 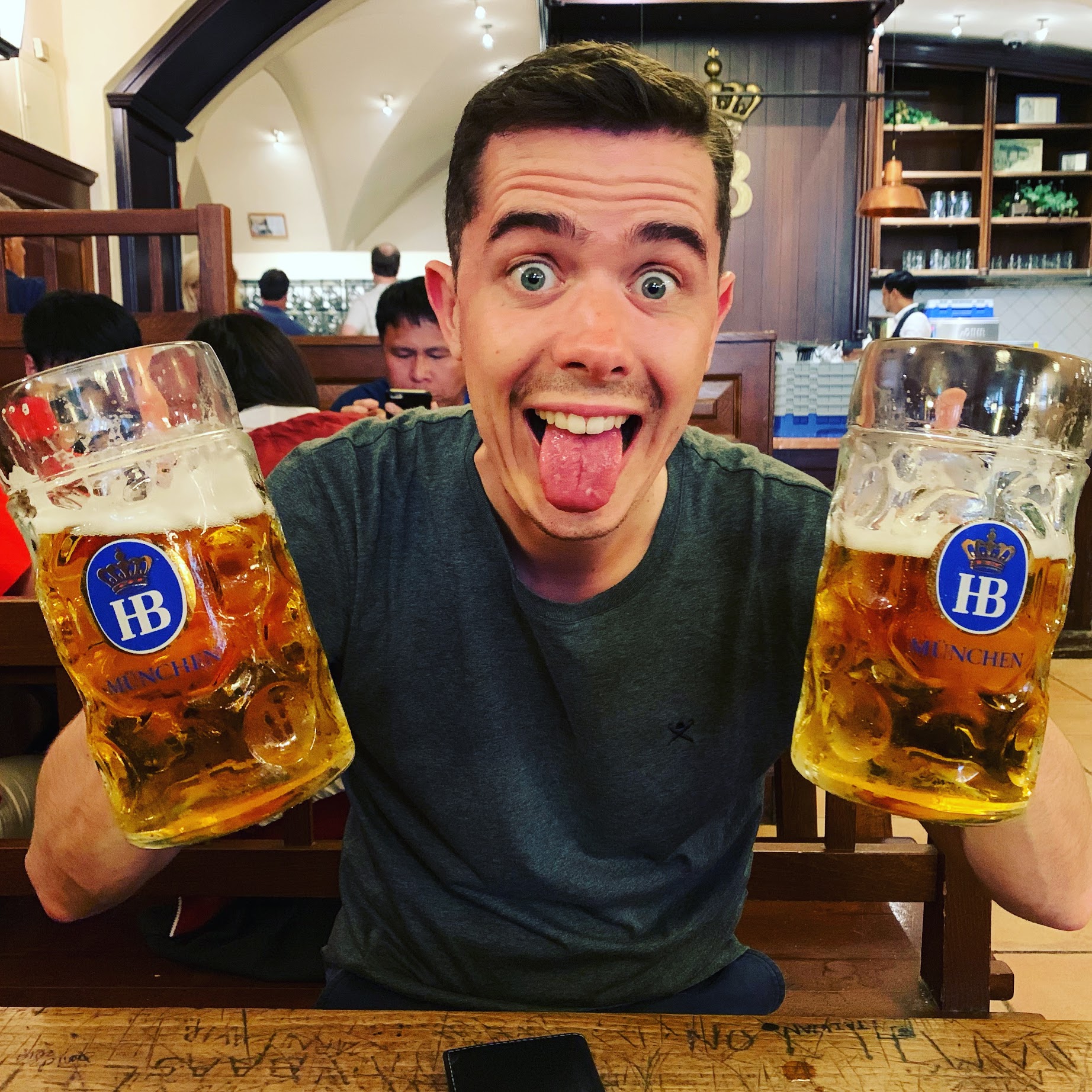 Owen decided at this point to reject the beer and filled up the empty steins with the contents of his very liquid stomach. The Irish couple who were sharing our table were not mega impressed, but persevered with their freshly served food while Owen semi-discretely blew chunks. Not ideal. My food arrived just in time for him to need to step outside for some air, seems 2.5 litres of German beer is Owen’s limit. 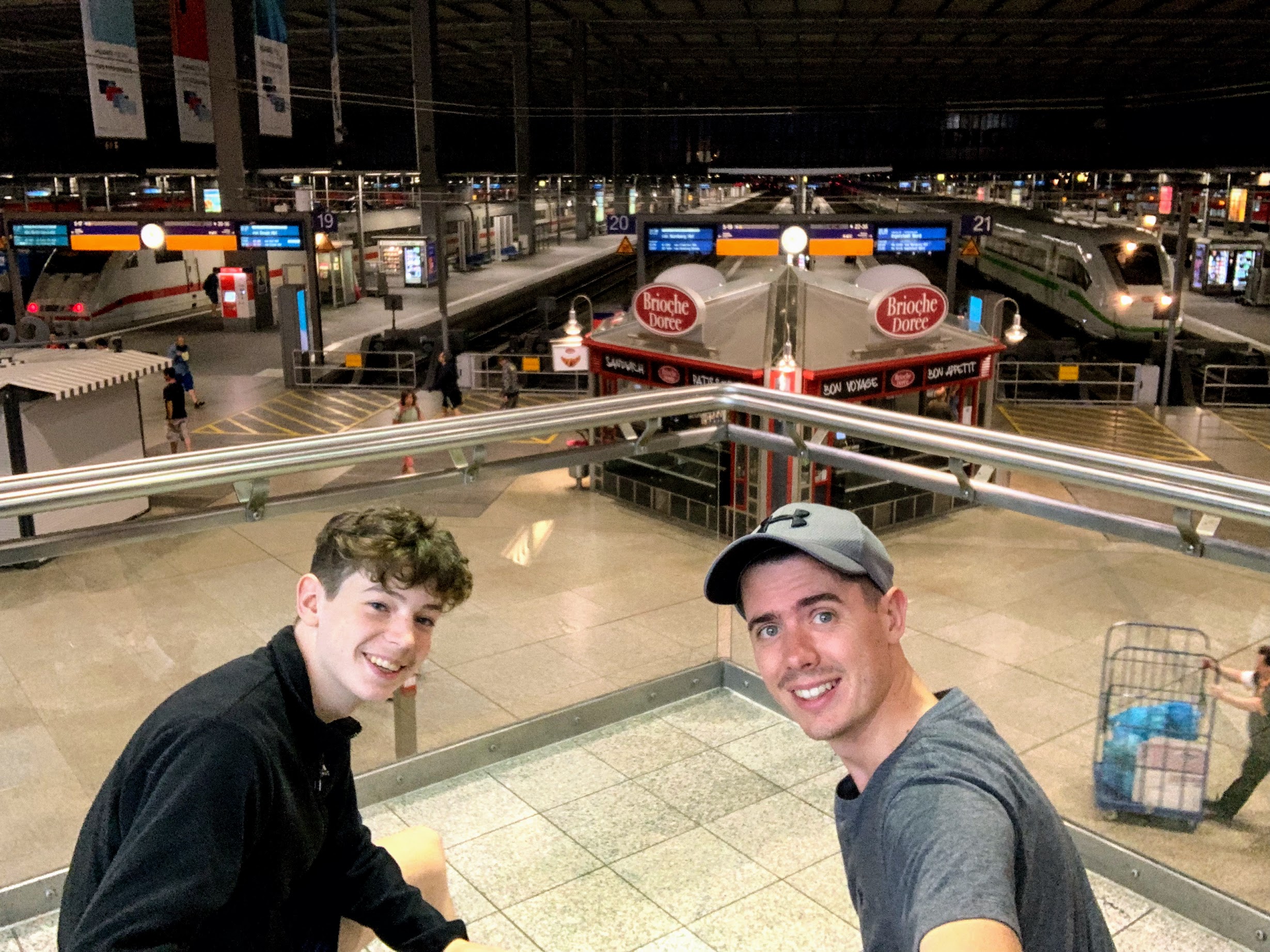 We headed back to the station and got ourselves some sleeper-train snacks and waited an hour or so for our train to arrive. We enjoyed watching out across Munich station as people came and went the big Grundig logos on the back wall slowly disappeared into the black night sky. With that, we wrapped up Day 3 - thank you Munich, you did your job.