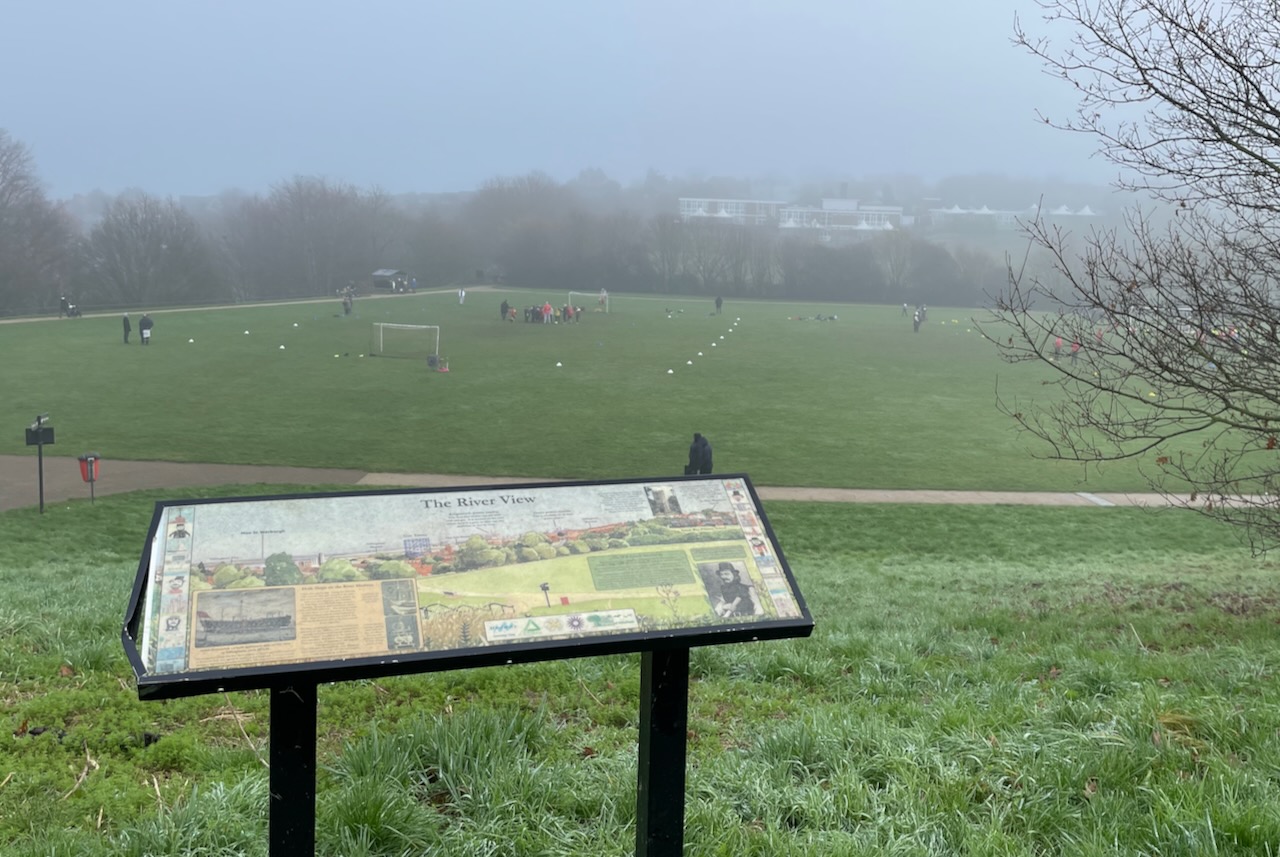 Park #4 of The Medway Parks Challenge, is another park that I somehow didn’t know about, and our third Green Flag’er, Gillingham’s Hillfields Community Park.

The park consists of three sections, each at a different level, a sizeable play park on the lower part, on Parr Ave, a flat sports field and an upper orchard. The grounds are nestled between two primary schools, St Mary’s Catholic School to the south and Saxon Way Primary School to the west. There’s a third school, Rivermead a stone’s throw away from the play park too, did some work there a while back, lovely old Victorian building. To the east there is a disused railway line that leads from the mainline to Chatham Docks. Don’t really know why I didn’t know about this park, I’ve certainly driven along this road a few times before but I guess I just never noticed it. 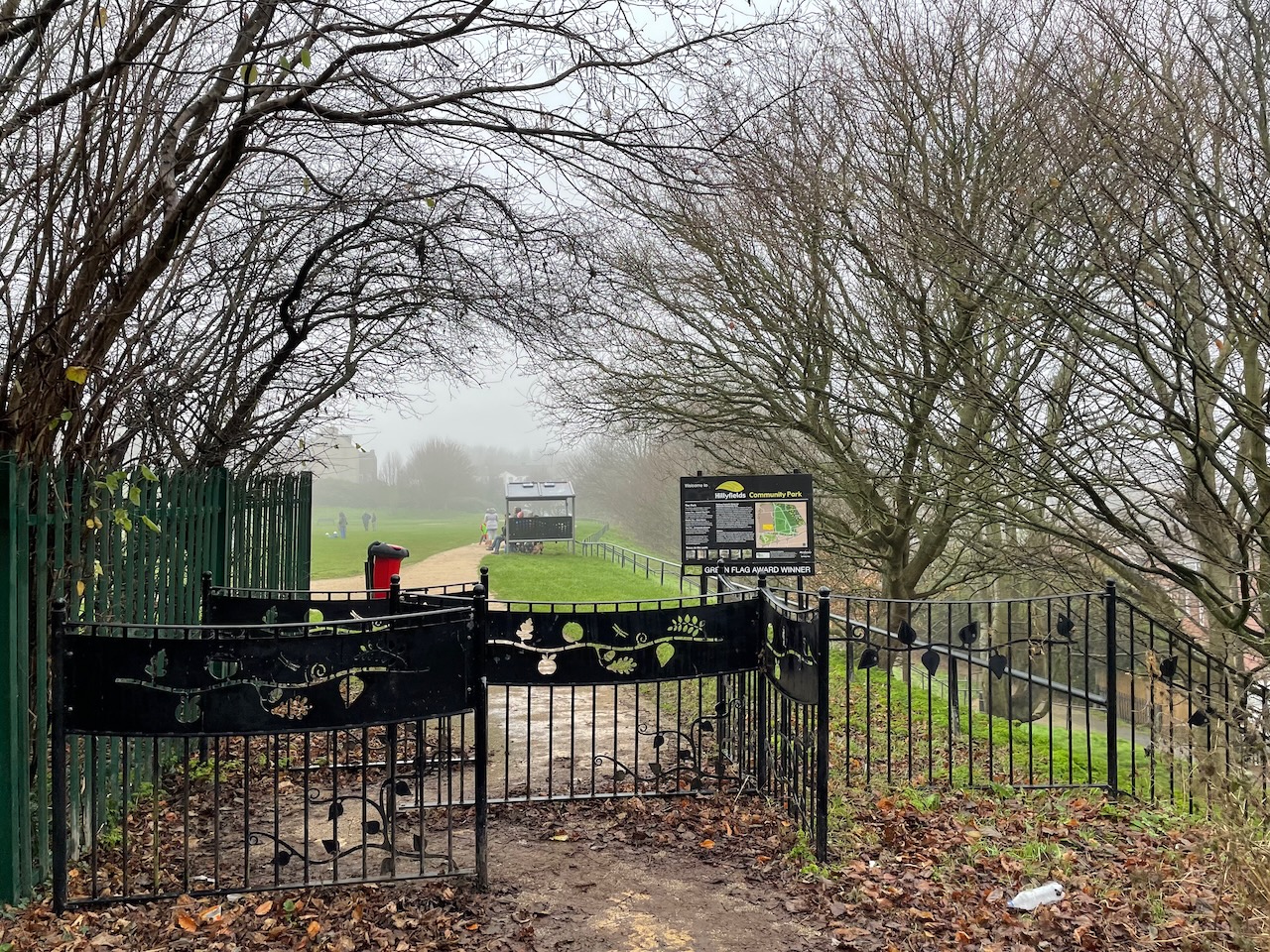 The park is reasonably big given that it’s in the middle of Gillingham and it’s really accessible for residents living close by. The whole grounds consist of about 10 acres. It’s mostly paved although there are quite a few steps, so it’s not the easiest to access with a buggy or wheelchair. The best option is to use the entrance on Parr Road between Garfield Road and Corporation Road, (which seems to be the main entrance). This entrance is actually a footpath and forms the Saxon Shore Way. Believe there’s also step free access from Greenfield Road to the south and Church Path to the west. It’s not possible to get from the play park to the top field without steps, unless you back track along Parr Ave and use the main entrance, annoyingly it would be relatively simple to make it step-free if the council installed a small incline/ramp on Knight Ave, which is just six steps. 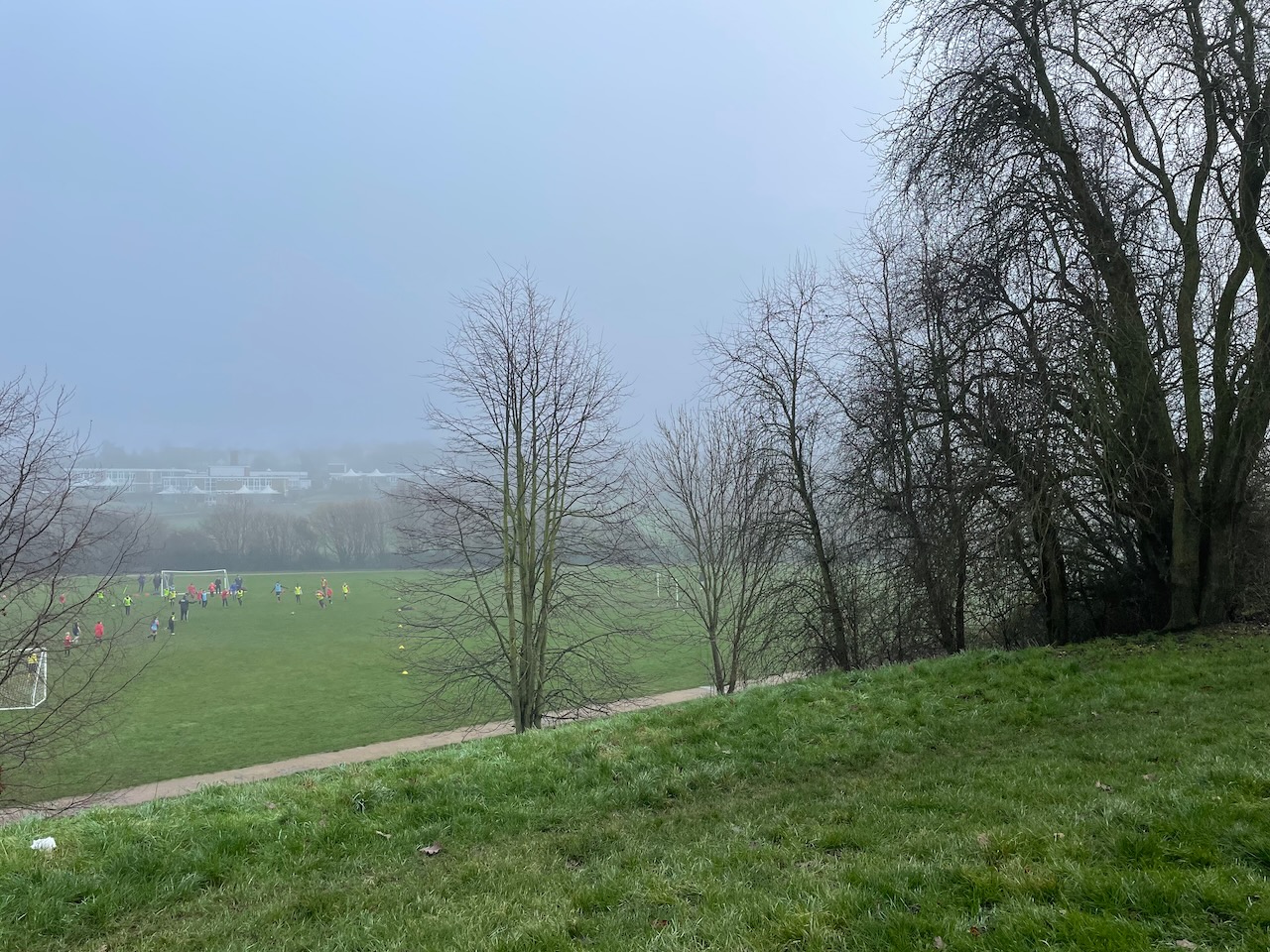 The main field at Hillyfeilds consists of a pathed ring of about 450m which has distance markers making it easy if you’re running. It’s very flat, so this would be great for an easy going jog. Inside the loop is about 3 acres of grass which was being used by a kids football school on the Saturday morning when we visited, very nice to see it being used. There’s a fixed goal at one end, although the school was using their own netted goals. There are benches and litter bins throughout and even a covered and lit shelter for if it rains!

The upper orchard area can be accessed from the main field by a big set of steps or a steep grassy ramp to the south. There’s also step-free access from Rosebery Road which might work. Up here the orchard area is divided into a wooded area with a small pathed route and a grassed open area with trees. There’s a couple of picnic tables although unfortunately they were all pretty well vandalised and surrounded by beer cans. I imagine the view from up here is actually quite impressive although it was very foggy for us! There’s a couple of signs, one showing the river view and another explaining the orchard. 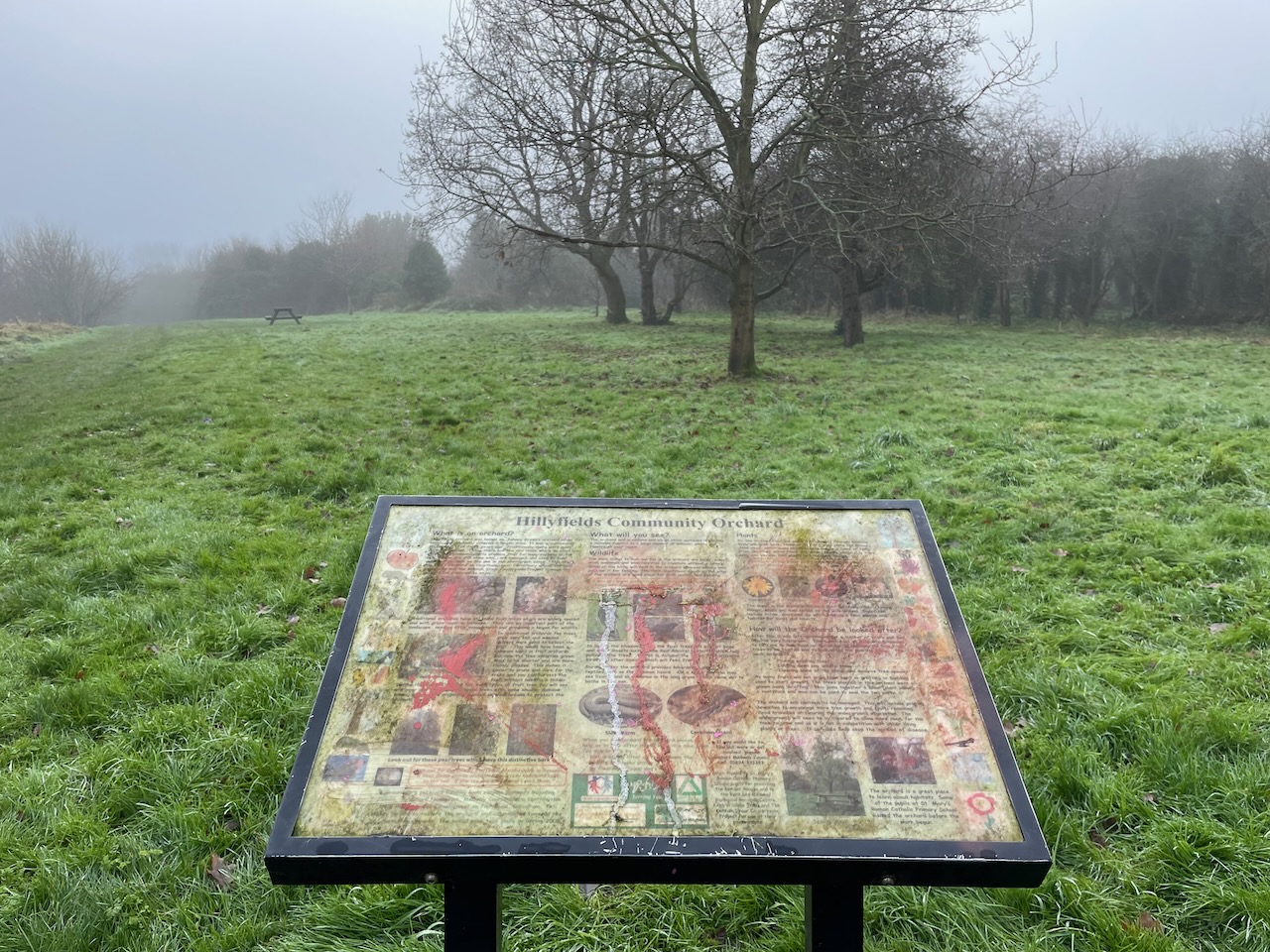 The orchard sign was heavily vandalised and no longer really legible, it seems to talk about the history, some of the trees and wildlife. I reported the damage to the council once we got home, although none of it looked particularly recent. The bank to the main field is quite steep and I imagine a great place for sledding after it has snowed. Despite a lot of people on the main field nobody was in the orchard area at all, it was quite nice and peaceful. I didn’t walk through the wooded area. 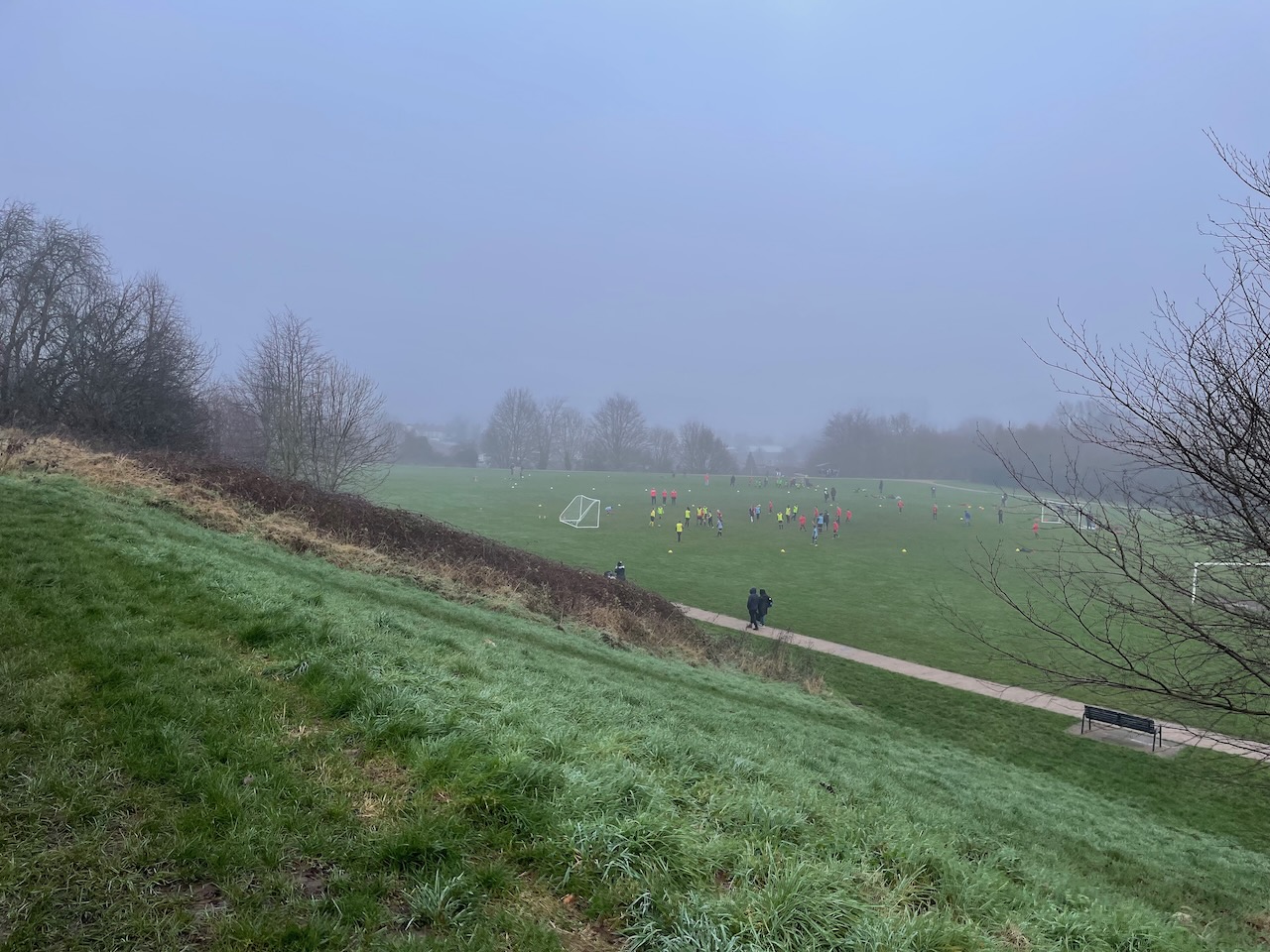 At the bottom field there is the play park, this is actually quite big and has a few unique attractions including a really long slide, a spider-web type climbing frame, two(!) roundabouts and even a sandpit. To add some extra fun, there was also a traffic cone, shopping trolly and an old chair - reported to the council. I don’t really know why, but there was nobody in the park, despite it being prime park time. Things felt a bit grubby and sad, the extra long slide was full of dents from vandals and probably not something you’d feel too happy for your kid to use. All set in a nice grassy area though and I’m sure really popular in the summer. There’s benches, litter bins and picnic tables too. There are no dog signs as is normal for play parks. One thing that’s a little unusual is that the park isn’t gated although there is some space to the road. 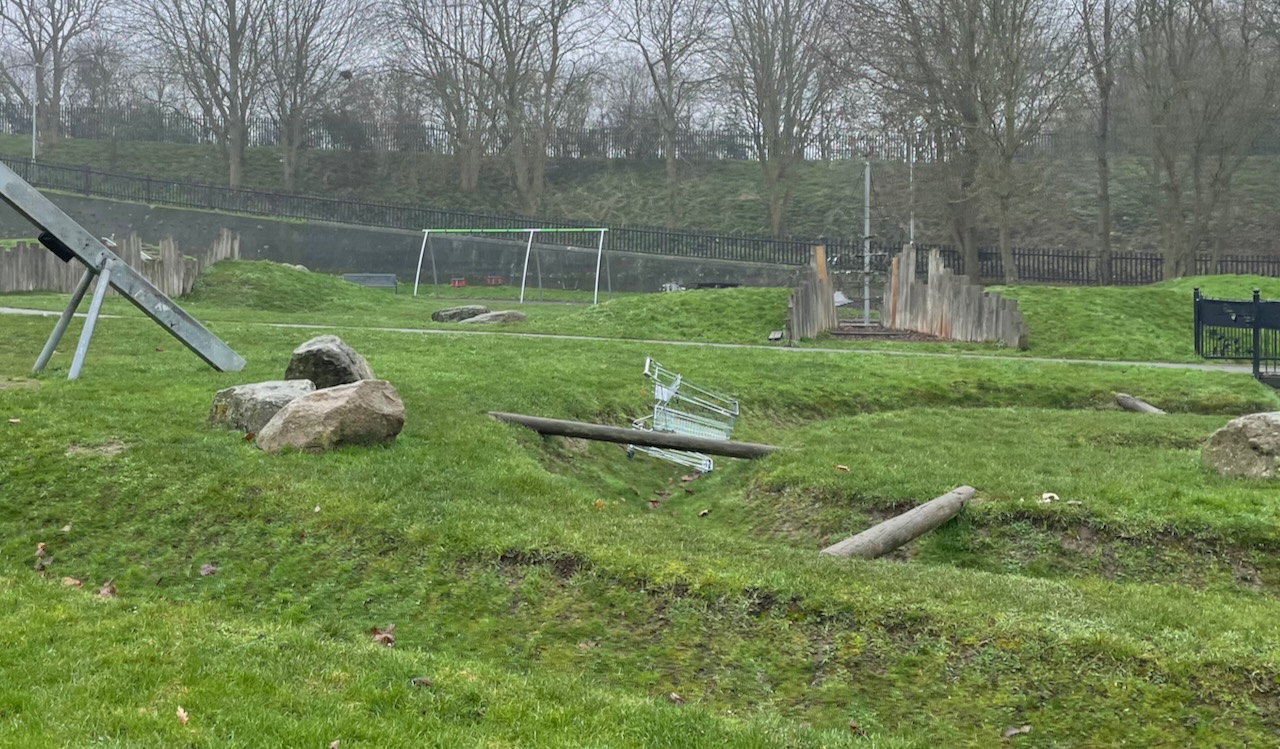 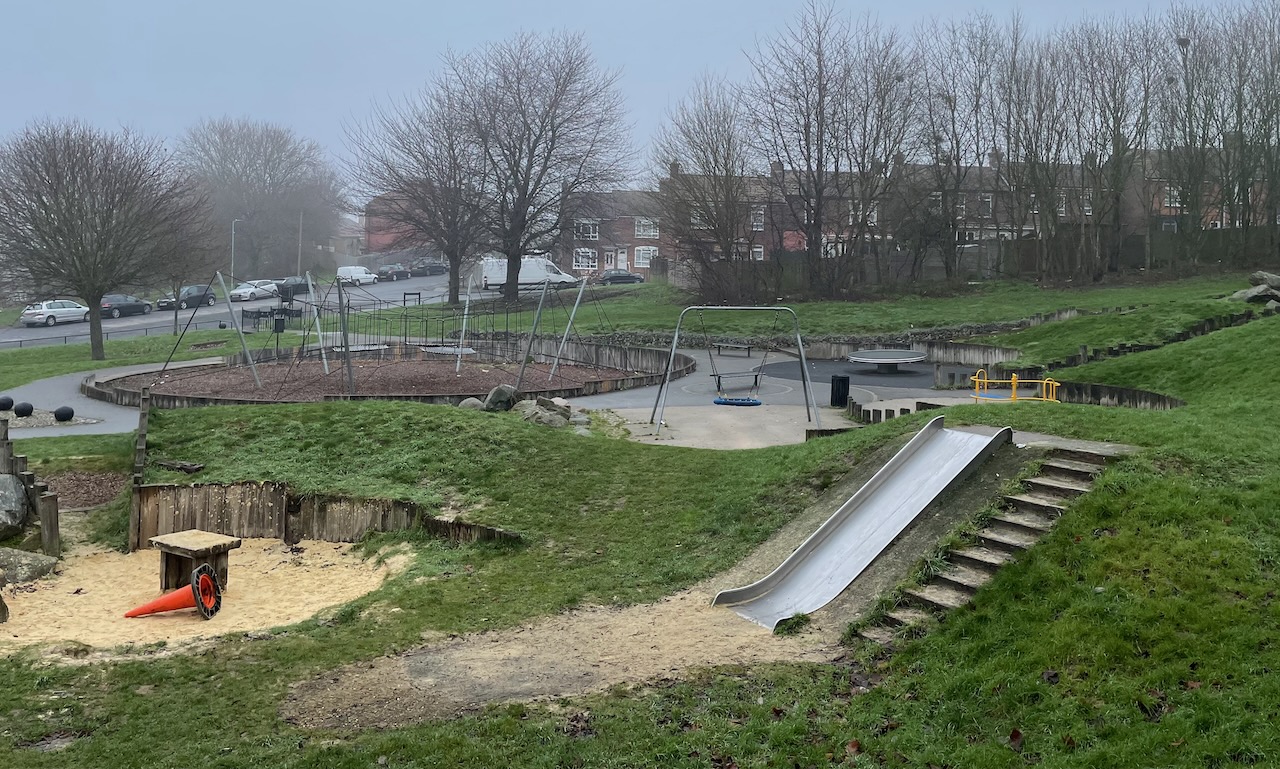 Parking at Hillyfields was not great, all the roads are permit holders only. That’s probably not an issue for most people, but an inconvenience for us. We managed to find a side road to park which was fine in the end. I’m sure we would have been ok if we had parked in a permit area given the day and time, even though it was restricted. Sadly there was litter all over the park, particularly off of the footpaths and near benches. The park does have a friends group, but it seems quite dormant compared to Broomhill and The Vines. We enjoyed our little visit, but probably wouldn’t come back in a rush given the trouble parking. On to the next one!